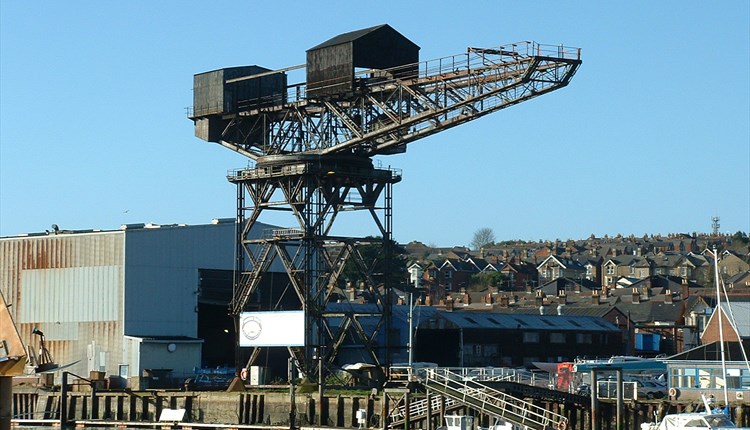 You cannot miss this massive dockyard crane at the mouth of the River Medina at Cowes. You can see it as you walk out of Cowes along the Birmingham Road, as you approach the chain ferry from East Cowes, and as you come into Cowes from the sea. Constructed in 1912 by Babcock and Wilcox of Renfrew Scotland for the Cowes shipbuilder JS White, this giant crane could lift up to 80 Tons and was used during the construction of many ships and naval vessels to lower the massive boilers and turbines into the engine rooms.

Some notable ships were build in Cowes: HMS Cavalier built in 1944 and saved in 1977 by Earl Mountbatten of Burma to be preserved at Chatham as a memorial to the 143 British destroyers and over 11,000 men lost at sea during WW2, and the Polish Navy ORP Blyskawica which is preserved in Poland and has been awarded a World Ship Maritime Heritage Award. The ‘ORP Blyskawica’ is famous in Cowes for defending the town during an air-raid in 1942 whilst being refitted under the hammerhead crane.

The Cowes Hammerhead crane is unique being the only pre WW2 dockyard crane left in existence in England and representing early structural, mechanical and electrical engineering design. This wonderful testimonial to the Islands shipbuilding history is protected as a grade II star listed structure and is also on the English Heritage list of heritage structures at risk.

Unfortunately you can only view this lovely crane from a distance as it fenced off from the public for safety reasons whilst repair is awaited. The best view point is at the East Cowes chain ferry terminal, as you can see from the photograph, and from the chain ferry as you cross the River Medina. You can obtain more information from the Cowes Hammerhead Crane Trust’s website.

DRIVE LESS SEE MORE EXPERIENCES:
Your chance to see history afloat and travel by water on a Cowes harbour cruise with Solent and Wight line cruises. Departing in Cowes and giving great views of the areas Impressive maritime heritage. The Saunders Row sheds where the first sea plane was built in the 1900’s and to see the classic hammerhead crane. These cruises last 20 minutes and cost only £4 per adult.