The Depot
Park Road
RYDE
Isle Of Wight
PO33 2BE 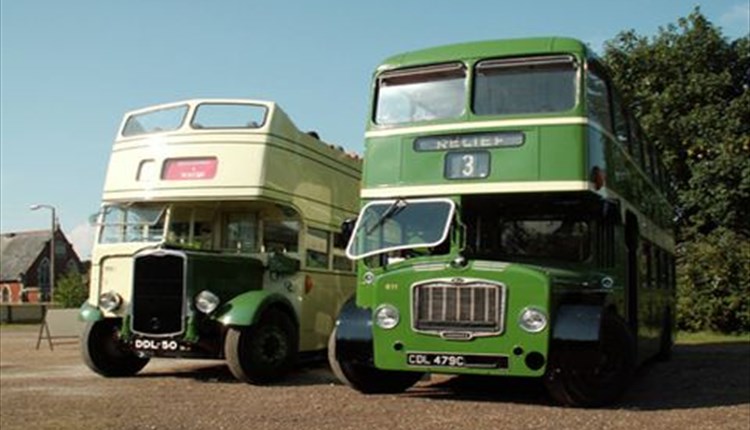 An impressive collection of Island buses and coaches dating from 1927 to more recent examples are housed here. The museum is now situated in the former Southern Vectis bus garage in Park Road, Ryde, which was purchased by the volunteer-run registered charity in 2014 and first opened its doors to the public at Easter 2015. The collection had previously been displayed in a rented, council owned building at The Quay in Newport.

There are over 20 vehicles on display. These include a 20 seater Dennis Ace bus, beautifully restored to as new 1934 condition, which worked the Ryde - Alum Bay Coastal Route (with air connections at Ryde Airport!) pre-war.  There is also a 1939 double-decker converted to an open-top for use along Shanklin Esplanade, surviving 30 years in normal service. Another open-topper new to Hants & Dorset in 1940 (but operated on the Yarmouth-Alum Bay route in the 60's & 70's) is being restored by Museum volunteers after being discovered derelict in Holland.

The most recent addition to the collection is of a Bristol K-type lowbridge bus. Currently under restoration, this type of bus was lower in height and designed to pass under low bridges. It has bench type seating upstairs and a ‘sunken gangway’. This type of vehicle was superseded by the pioneering 1950's Lodekka bus, examples of which are also within the collection.  Later buses from the 1960's through to the 1990's are included to interest visitors of a younger age. There is also a vintage, open rear platform, Paris bus from the 1930’s, which together with a display of posters, allows for a small taste of France in a corner of Ryde.

Apart from buses and coaches, our collection also includes an ex-Southern Vectis  AEC Matador tow-truck, delivery bicycle, together with mock up displays from the old ‘Round the Island’ coach companies with advertising boards. There is an area being developed to show other facets of a bus garage operation- inspectors/training room plus a storage area where there is a photographic display of many former Island bus drivers and conductors/conductresses.

The premises now include a teabar providing light refreshments, which can be enjoyed on our “Shanklin Steamer” single-decker cafe bus. Disabled facilities and toilets are provided. Off street car or coach parking is available in the large outside yard. A Museum shop sells transport related items including books, models, bus uniforms, photographs and postcards.

We hope you enjoy your visit.

* Closed from the 1st November and re-open at Easter.