You are here > Home > Things To Do > Shanklin Chine 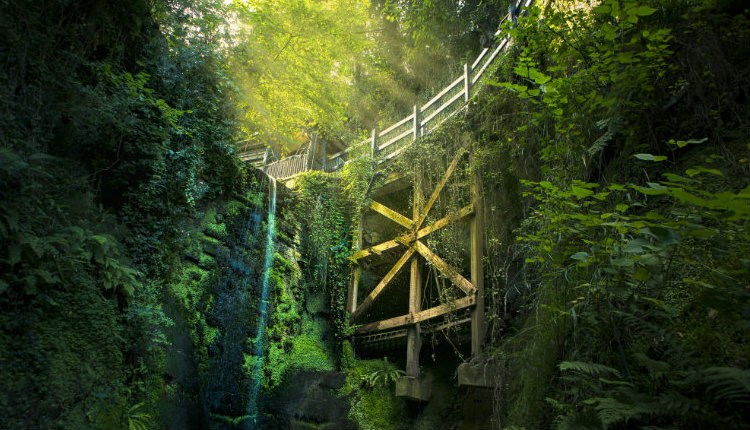 Prices include attraction map, musical performances and the Chine Illuminations.

The gates to this historic gorge first opened back in 1817, making it the longest established attraction on Isle of Wight, enticing many millions of visitors to wander through and marvel at its natural beauty over a double century of seasonal openings.

There are few locations on the Isle of Wight, let alone England, that can boast such a tranquil and picturesque location for visitors to enjoy. The stunning tree lined Chine cuts its way from Shanklin Old Village to the sandy beach and Esplanade far below and has always been a magnet for renowned artists, photographers and those seeking respite from the hustle and bustle of modern age. Shanklin Chine boasts many famous visitors who have stopped to paint, draw and write about the natural beauty it beholds. From author Jane Austen to romanticist landscape painter J.M.W Turner, all have been attracted by the timeless and magical beauty captured in this remarkable gorge, with its waterfall, shear chasm-like sides decked in lush vegetation and towering trees

Visitors can enjoy the splendour of Shanklin Chine by day...then wonder at its mystical beauty on summer nights during the Chine Lumierè, when hundreds of lights illuminate the narrow paths, streams and waterfalls held within.

Shanklin Chine has a well-stocked gift shop and popular Victorian style tea room, with a newly extended tea garden. Taking a cream tea at the attraction is definitely one of the highlights to any visit. There is also a full menu of light lunches and meals prepared to order by the tea room team.

The attraction also features a special monument to the crack 40 Royal Marine Commando who trained in the Chine in preparation for the Dieppe landings on D-Day in World War II. Visitors can also learn about the role of Shanklin Chine during this period- in particular the part played by the Marine Commandos' and the famous PLUTO (Pipeline Under The Ocean) which carried petrol to the Allied troops in France.

Visitors of all ages can enjoy a leisurely stroll through Shanklin Chine...a wondrous secret discovered and loved by so many people during its historical reign as the Island’s most original of tourist attractions. With entrances at both the Old Village and Esplanade ends, it makes the perfect scenic cut through between Shanklin’s busiest locations that no visitor should miss.

Enter the attraction from the Old Village and Shanklin Sea Front:
Old Village entrance:  Park at the main Old Village car park at the High Street/Chine Avenue junction. Walk back to the High Street, turn left between The Crab pub & Pencil Cottage and walk 100m
Sea Front entrance: Park on Shanklin Esplanade and walk to the end of with the beach on your left hand side, head up the hill and look for the signs.

Or use the Island Line train to Shanklin Chine. Use the frequent train service from Ryde Pier head to Shanklin Station to reach us.

* Pre-booking is not required.
* Gates open at 10am with the illuminations being turned on at dusk.
* Gates close at 10pm (last entry is 9.30pm).
* Please note due to the natural formation of Shanklin Chine it is a weather dependant attraction and may be forced to close during bad weather, sometimes at short notice.