You are here > Home > Things To Do > The Long Stone 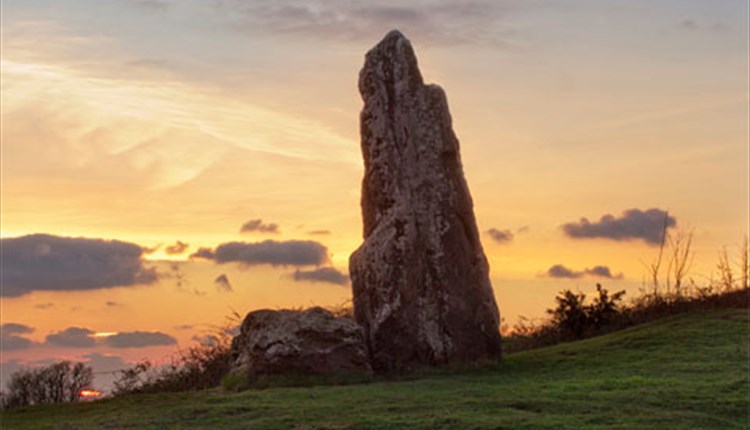 Legend has it that St Catherine and the Devil had a contest to see who should control the Isle of Wight. The Long Stone’s tall iron sandstone pillar was supposedly thrown by St Catherine from the Down to the east which bears her name.

At over 4m high and 2m wide, this was a mighty feat indeed. The Devil’s smaller stone (a mere 2.9m high and 1.2m wide) fell short and he lost the wager. The final resting place of the stones – St Catherine’s dominating the recumbent smaller stone – is said to symbolise the triumph of good over evil.

The Long Stone marks the entrance to a Neolithic long barrow. It has now been shown that the stones are what remains of a 6,000-year-old Neolithic communal long barrow for burying the dead: 31m long, 9m wide and 2m high. Long barrows in this part of England that aren't on chalk or limestone are rare. It is thought that bodies were laid out for birds and animals to feed, then the bones were buried in chambers and the soil heaped up into a mound.

In Neolithic times the mound was likely to have been higher. People probably worshipped the sun and moon; this may be the reason why the Long Stone barrow is aligned west–east.

The Long Stone site is no longer as it was intended to be the burial mound has been damaged over the years and the stones themselves may have been moved in Saxon times. They were certainly dislodged in the 19th century by Lord Dillon, a local squire who was curious to see what lay beneath them. He unearthed nothing for his efforts.
1956 excavations revealed kerb stones and part of the ditch which had run around the mound.

Moot Stone: a meeting place in Saxon times Ancient burial places frequently retain their cultural and mystical significance for thousands of years. In Saxon times - 4,000 years after the Neolithic long barrow was built - the Long Stone is thought to have been used as a meeting place where judicial and administrative affairs were carried out.
'Moot' is Saxon for meeting place and it is possible that the name of the village – Mottistone – is a corruption of 'moot stone'.

People still celebrate the solstices and equinoxes at the Long Stone to this day.

DRIVE LESS SEE MORE EXPERIENCES:
A car free pilgrimage to the Long stone, a place of ancient magical mystery where the Morris men still greet the Sun on May day morn. A ramble by bus. Take the coater bus to Isle of Wight Pearl on the Military Road then head north. Take footpath 71, Byway Open to All Traffic (BOAT) 104 then footpaths 67, 42, and 84 up into the downs to this Stonehenge like monolith. Catch a later bus back at Isle of Wight pearl or carry on over he Downs to Freshwater bay for an afternoons walk.