You are here > Home > Things To Do > Farringford 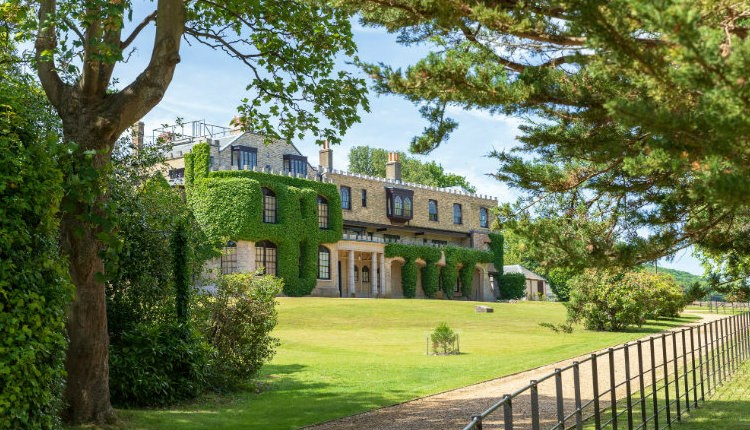 Payment by card only.
RHS members - free entry on Wednesdays & Thursdays only. Proof of membership required at the ticket office.

The house will remain closed in 2021.

Farringford on the Isle of Wight was home to Alfred, Lord Tennyson, Poet Laureate from 1850 until his death in 1892. On seeing the view from the drawing room window of this imposing gothic house for the first time, the great poet’s wife, Emily, exclaimed, ‘I must have that view!” Farringford became their home in 1853, and would remain with the family for two successive generations. It was here that Tennyson found the quiet and relative seclusion he needed in order to write. He drew inspiration from the surrounding landscape, and lines would come to him as he strode the downs in his distinctive wide-awake hat and cloak. Both Idylls of the King and The Charge of the light Brigade were written in his library, with its commanding view of the down and sea, beyond the “careless, ordered garden”, as once described by the famous poet, who favoured informal planting schemes. Tennyson was a keen gardener, regularly planting shrubs, raking leaves, and rolling seaweed onto the lawns for fertiliser, gathered from his coastal walks. His love of the natural world was such that he felt great remorse if flowers were ever picked from the garden, or gathered from the woods or down land.

The Walled Garden
The award-winning walled garden with its colourful planting scheme, based on descriptions from Emily Tennyson’s Journal, and on the striking watercolours of Helen Allingham, are open to the public.

Tennyson's love of the natural world was such that he would not permit the cutting down of trees, which guaranteed his seclusion, or the plucking of flowers, whether wild or cultivated. But he made an exception for the walled garden, and here a great variety of flowering plants grew in wild profusion among the ornamental cabbages, vegetables, fig, quince and apple trees.

The garden slopes to the west, at the top of which is a replica of the arbour which the poet built with rushes gathered from the withy bed, so that Emily could enjoy the afternoon sun and the view facing west. In time, the sweetly scented climbing plants will engulf this restful retreat, much as they did in Helen Allingham’s portrayal of the original.

The colourful planting scheme visitors will see today includes oriental poppies; poet’s laurel (Danae racemosa); ‘King Arthur’, ‘Galahad’ and ‘Guinevere’ varieties of delphinium; and tobacco plants (Nicotiana sylvestris), although they are no match for Tennyson’s, described by one visitor as towering over seven feet high!  Fruit and vegetables are also being grown, in keeping with the practical use of the garden, with additional varieties of apple and quince trees being planted this year. A Victorian replica working greenhouse shelters an espaniolated fig and is put to good use for the cultivation of the many traditional shrubs and flowers documented in Emily’s journal.

No booking is required to visit the garden.

Farringford House
Farringford is now fully restored and furnished to much as it would have been in Tennyson’s day, and includes important artefacts original to the household. The house will offer pre-booked guided tours in 2022.

Please note that we do not have a cafe or gift shop at Farringford. A limited selection of soft drinks and some Tennyson related books and postcards are available from the Ticket Office.