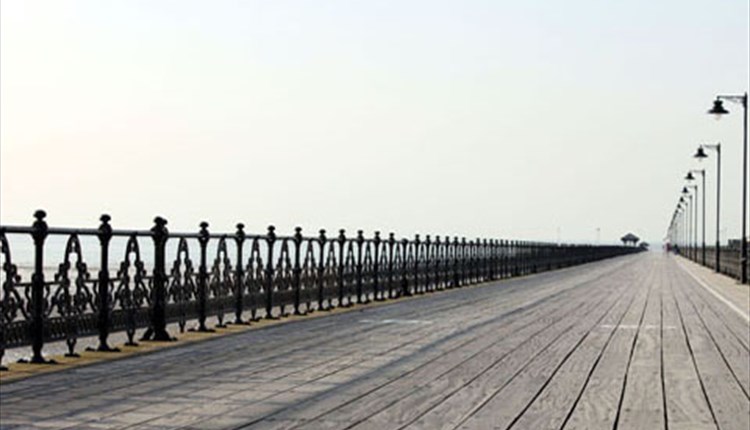 Ryde's pier is the second-longest seaside pier in the country. Only Southend's is longer. The original wooden structure at Ryde opened in 1814. At 1,740 feet, it allowed ferries to berth even at low tide, when the sea retreats half-a-mile from the shore. It was extended in 1824, and reached its present length of nearly 1/2 mile by 1842.

Ryde Pier is really three piers in one. A second, parallel pier was built in 1864 to support a horse-drawn tramway. This ran from the pier head as far as the pier gates and then through the town to provide a connection for steamer passengers with Ryde's original rail terminus at St John's Road, a mile to the south.

The big mainland rail companies operating into Portsmouth - the London, Brighton & South Coast and the London & South Western - built a third pier to carry a double-track rail line from the pier head to Ryde Esplanade. This 1880 'joint line' then ran inland via a tunnel, to connect with the railway at St John's Rioad and open up steam train travel to the ferries from all rail connected parts of the Island. Today the electric train service to Shanklin, using London Underground trains built in the 1930s, uses this line. From the pier head, passengers cross The Solent on Wightlink's catamaran ferries to Portsmouth.

The horse tramway was cut back to its pier section, sandwiched between the promenade and railway piers. It remained in use, operated by steam, electricity and, most recently, petrol railcars, until 1969. From 1927, the tramway comprised two parallel single tracks, each with a petrol-engined tram and trailer car. For tens of thousands of holidaymakers, the ride down the pier on the tram was their first experience of the Isle of Wight. Remains of the substructure survive.

The Isle of Wight Steam Railway has recently launched an appeal to restore one of the two trams, Car No.2, which it acquired in 1969, to full working order.