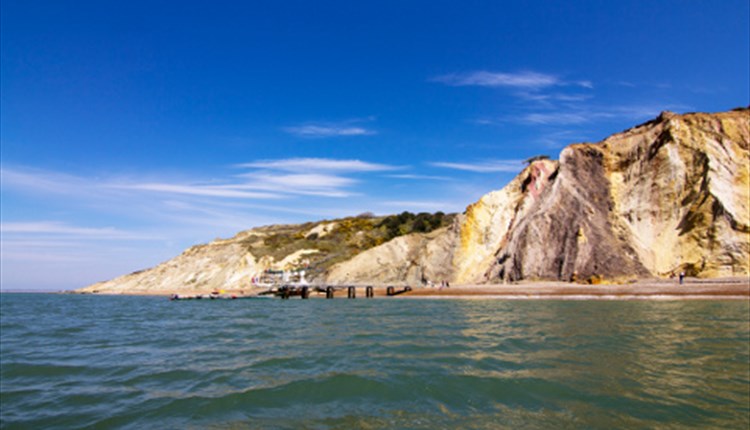 Alum Bay is well known for its multi-coloured sand cliffs and the area is also renowned for its stunning views across the Solent. Many homes around the world have a glass object filled with sand as a memento of a visit to Alum Bay and Needles Landmark Attraction, but perhaps less well known is the recent history of Alum Bay.

Approximately 70 million years ago the sea bed rose, was eroded and then sank beneath the sea again. The new sea was shallow and it laid down a series of sands and clays. Some 10 million years later movement in the bedrock caused these sediments to be pushed nearly vertically to form the multi-coloured cliffs that are visible today. The sands are made of three minerals - quartz, felspar and mica, and in their pure state are white, with other colours being produced through contamination by other minerals.

In the latter part of the 18th century the first tourists started to arrive at Alum Bay and during the early part of the 19th century it became an essential place to visit during an Island holiday. During the two World Wars, however, the Alum Bay area was heavily militarised and access to visitors was barred.

The pier was 370 feet long, and was 'paddle shaped' so that the pier head was twice as wide as the promenade leading to it. On the pier was a café , gift shop and a small restaurant, where a glass of water cost 1d. The pier was often very busy, no more so than on July 23 1909, when the 9060 ton German liner Derfflinger ran into the Shingle Bank off the Needles, and two-and-a-half miles from Alum Bay. She was trapped for two days before the tugs nearby were able to pull her free, all of which was witnessed by people on the pier.

After the war, Alum Bay pier was virtually abandoned. The last steamer to call at it was Red Funnel's Queen in 1920. By 1925 the pier was declared unsafe and closed, and in the winter of 1927 the pier suffered severe storm damage, and broke in two. Only the shore half remained, and was still in use when Alum Bay was used as a military practice area in World War II. Now, no trace of the pier remains, and Alum Bay just has a small landing stage. The easiest way to get to the bay now is by using the chairlift, which, since 1973, has helped tourists descend from the Needles Landmark Attraction that has opened at the top of the cliff.

NEEDLES ROCKS:
When it comes to the Needles rocks themselves, originally there were four rocks and you can see the gap very clearly, like a missing tooth and the name ‘The Needles’ comes from the fourth rock, which was needle-shaped and known as ‘Lot’s Wife’ (the book of Genesis in the Bible records that Lot’s Wife was turned into a pillar of salt as a punishment for looking back after being told not to when she was fleeing from the destruction of Sodom). At 120ft, this rock was the tallest of the four and its spectacular collapse in a great storm in 1764 is said to have been felt in Portsmouth, but despite its demise and the relatively squat shapes of the surviving rocks, the name ‘Needles’ stuck.

Apart from its natural beauties and geological curiosities, Needles Landmark Attraction has another claim to fame for its part played in the early days of radio transmissions. In early December 1897, to investigate and experiment with transmission to ships at sea, Guglielmo Marconi set up his revolutionary wireless equipment in the Royal Needles Hotel, above Alum Bay, and sent the very first wireless transmission.

The original lighthouse was erected in 1785 on the summit of the Downs at the western extremity, 462 ft above sea level. However, it was generally considered that the building was too elevated above sea level to be really useful, especially in poor visibility, and it became disused when its replacement had been built.

The present lighthouse – Trinity, at 109ft high, clings to the base of the most westerly rock of the Needles group. It started working on 1st January 1859, taking over from the original lighthouse on the cliff top.

THE NEEDLES LANDMARK ATTRACTION:
The Needles Landmark Attraction has a range of attractions that includes the spectacular chairlift ride to the beach and the sand cliffs. At the sand shop visitors can make there own unique coloured sand souvenir. There is a variety of children’s attractions including a traditional Victorian carousel, Spins and Needles Tea Cup ride and not to mention the Games Kiosk which includes tin can alley and hook a duck. You even win a prize every time!

The Needles Landmark Attraction has great shops including The Pier Head Shopping Emporium where you can find an interesting range of souvenirs to suit all budgets and tastes.

The attraction has full catering facilities including a fully licensed tearoom and kiosks serving fresh coffee, ice cream and more.

DRIVE LESS SEE MORE EXPERIENCES:
Catch the ever popular Needles Breezer open topped bus from Yarmouth out to the famous Needles. A theme park ride in itself the bus drops you right at the Needles Landmark Attraction door or on the National Trust battery on top of the downs.

* Open 7 days a week (not open weekends in January). From 10am (closing times vary during year). Closed over Christmas/New Year period.