You are here > Home > Things To Do > All Saints Church (Freshwater) 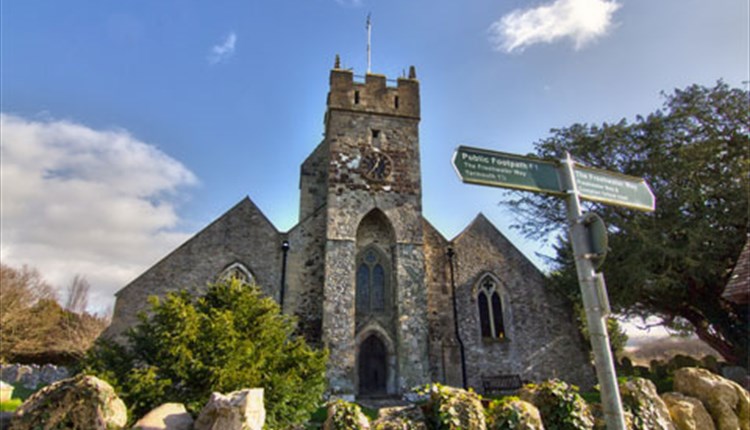 The church is of Saxon origin and stands near the head of the tidal estuary of the River Yar.

The late Saxon church had an aisle-less nave. Some of the quoins (dressed stones at the angles of a building) at its north west and south west angles have survived and are visible from inside. Around 1190-1200 aisles with three-bay arcades were added to the Saxon nave, and chapels were created to the north and south of the original chancel. The north doorway opened from a small Victorian porch and has three orders of zigzag facing outwards. It, along with the polished Purbeck marble font, is also late 12th century.

Further work was carried out in the mid to late 13th century, including part of the chancel, a new west bay to the nave and aisles, and the west end was started. The climax of the 13th century extension is external: the giant arch that projects from the west wall and is still such a dramatic feature as you approach the church. The south chapel has a late 13th century tomb recess.

All Saints was heavily restored in 1875-6 by W.T. Stratton which resulted in the church looking largely 19th century outside. The medieval lean-to aisles were replaced by wider ones under separate gables, and the church was enlarged eastwards. The present chancel is largely Stratton's work. Two 13th century chancel windows provided models for his new aisle windows, giving the misleading impression that the present aisles are medieval ones restored. The stone pulpit, with its black marble columns, is thought to date from 1875-6.

In the south aisle is a two-light stained glass by Morris & C. It is based on a painting by the Victorian artist George Frederick Watts showing the Arthurian knight, Sir Galahad on a horse on the left, and again in armour on the right.

There are a number of interesting monuments. On the north chapel wall is a late 14th century brass to a knight. Within the medieval tomb recess in the south chapel is a 1992 bust of the Victorian poet Tennyson by Mignon Morrisot Jones, while the churchyard contains tombs to members of the Tennyson family.