You are here > Home > Things To Do > St Christopher Wall Painting 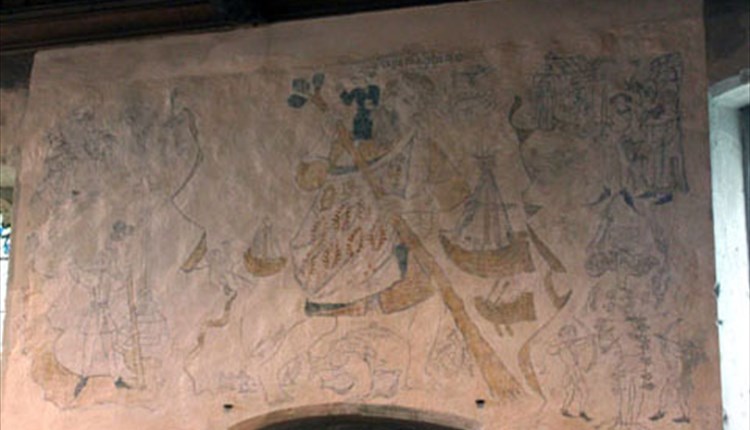 Over the north door of the church of St Peter in the village of Shorwell, is an elaborate wall painting depicting scenes from the life of St Christopher.

The saint is shown bearing the Christ Child across a river, but also appears on the left by a wayside cross, bidding farewell to the devil he had previously served; on the right we see the attempted martyrdom of the saint with arrows, one of which flies back to pierce the King of Lycia in the eye. The large central figure of Christopher is accompanied by the lantern-bearing hermit standing before his cell at the top. Also depicted are ships, a boat with oarsmen, a man seated on a bank fishing and various fishes.

Repainted in places the painting has been dated to around 1470.

There was a chapel on the site from about 1200. After various extensions, the building became a parish church in the Middle Ages. It has a 17th century stone pulpit with a wooden canopy fixed to the wall above bearing the date 1620. In the north chapel are the tombs of members of the Leigh family.