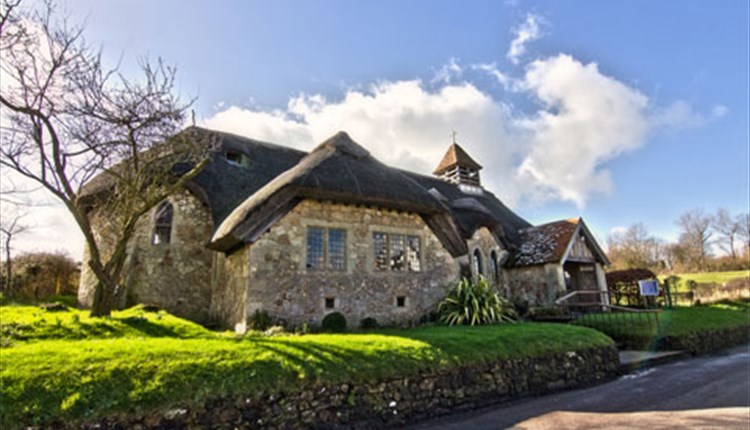 The 1908 church, with thatched roof, wooden bell-turret and apse, is by the architect Isaac Jones. Its simple west elevation, with two small lancet windows flanked by buttresses, contrasts with the picturesque north frontage. Inside the walls are rough and the roof has braced tie-beams. The three-arched wooden screen dates from around 1943-6. The detailed carving, including vines and foliage, was by the curate, T.G. Devitt. The choir stalls have panels densely carved in geometric patterns.

Hallam Tennyson, son of the Victorian poet laureate who lived at nearby Farringford, donated land for this new church in Freshwater Bay. Hallam's wife Audrey suggested that the church be named for St. Agnes and it was consecrated on 12 August 1908. It is the only thatched church on the Isle of Wight.

The stone used to build the church came from an old farmhouse on Hooke Hill, Freshwater, the birthplace of the natural philosopher, architect and polymath Robert Hooke (1635-1703). The farmhouse date stone was incorporated into the vestry wall and can be seen from the outside. This can mislead people into thinking St. Agnes is 17th century when it was actually built in Edwardian times.

DRIVE LESS SEE MORE EXPERIENCES:
St Agnes church designed and built by Prince Albert in Victoria reign is a gargoyle gothic church in grandiose style. The Taste Round the Island Cycle Route passes its door and it’s a great place to stop for a cup of tea in the coffee shop. Follow the way marked sign for the taste route from East Cowes or from Wootton for a day’s ride with this gothic masterpiece on route. Hire a bike from Top Gear Hire in Cowes. Look up their sail/ride package deal with Red Funnel Ferries.