You are here > Home > Things To Do > Sir John Oglander's Effigy 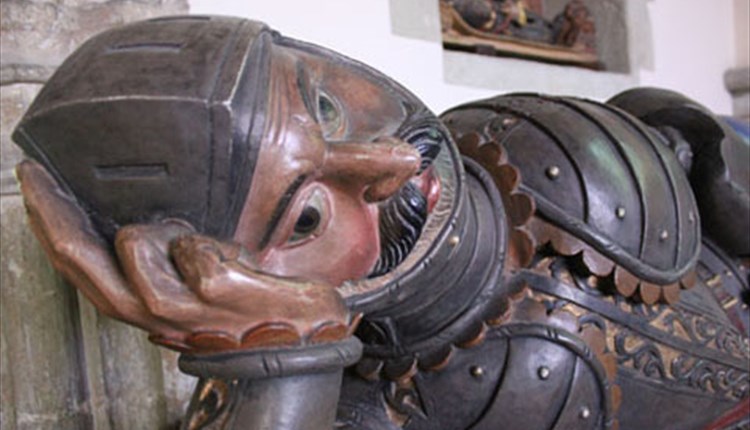 The Oglander family were manorial lords at Nunwell from at least the 12th century. Their table tombs and memorials in Brading church are amongst the finest on the Island.

Sir John Oglander died in 1655 aged 70. His carved wooden effigy is of national importance as an early example of romantic historicism: looking back in Victorian times to the Middle Ages. Sir John is shown lying on his side with one elbow propping up his head, a gesture that was out of date by the mid 17th century. His sword, shield and crossed legs are those of an early 14th century crusader.

Nunwell House was rebuilt by Sir John Oglander from about 1607. He was made deputy govenor of the Island in 1624. The following year he was elected MP for Yarmouth and sat in the House of Commons until 1629 when Charles I decided to rule without parliament for eleven years. A firm royalist, Sir John lost his deputy-governor position during the English Civil War and was twice arrested by the Parliamentarians. He took a concerned interest in the king's safety in 1647 and 1648 when Charles was held at Carisbrooke Castle.

Sir John kept detailed accounts of his household and estate. They are of particular interest because they evolved into a personal diary and provide vivid evidence of Island life and society at both local and national level. Some entries were written in his own blood.