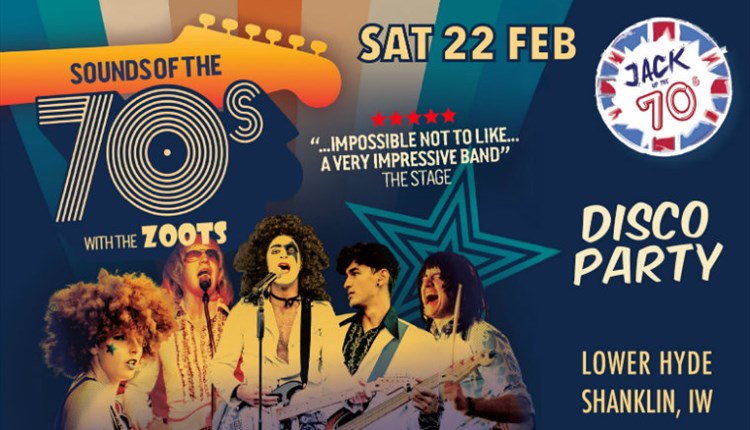 A strictly limited number of tickets can be purchased online & over the counter at Lower Hyde reception in Shanklin & The County Press office in Newport.

FINAL CHANCE TO SNAP UP LAST REMAINING TICKETS FOR ‘GROOVY’ NIGHT OUT!

Award-winning 5-piece band The Zoots are busy preparing to bring their smash-hit ‘Sounds of the 70s’ Show to the Isle of Wight on Saturday 22nd February. However with less than 100 tickets remaining organisers advise that this is one party you do NOT want to be late for!

The Zoots have sold over a million downloads, wowed audiences of stage and screen in more than 30 countries and played over 1000 shows. They have performed at iconic venues including Alhambra Theater, Windsor Royal Theatre and The London Palladium. Yet according to the band, their latest challenge comes this month because that’s when The Zoots debut at Lower Hyde Holiday Park in Shanklin for the hotly anticipated Jack Up The 70s disco party night!

The Zoots lead singer Jamie explains; “The Zoots have played in front of audiences on four continents, from Israel to Italy, Havana to Venice, Barcelona to Montego Bay – but there’s something especially nerve-wracking about playing to a crowd where you spent your childhood holidays!”
It’s been a fantastic 12 months for The Zoots who have recently been voted International Cover Band of the Year.

Harriet Lowther is The Zoots backing singer and lead percussionist. Speaking of the forthcoming event Harriet said; “It will be very special for us to perform our 70s show on the Isle of Wight of which we have so many fond memories. It’s our first time at Lower Hyde and it will be really incredible to play to some old friends and some new ones too!”

Event Manager Sarah Moss said; The Sounds of the 70s is a two hour show and the venue at Lower Hyde with its traditional wooden dancefloor and atmospheric lighting allows audiences to fully get into the groove for what is guaranteed to be an energetic non-stop performance, taking you on a journey back in time with over fifty hit songs from the 1970s.

Chic, T.Rex, Bowie, Queen, Blondie, The Jacksons and Abba are just some of the bands The Zoots will be covering with songs from musicals such as Grease and Rocky Horror Picture Show as well as other great Seventies chart toppers! Our Christmas event was a complete sell-out so we recommend buying tickets soon to avoid disappointment.”

A series of DJ sets with all your favourite 70’s party classics will continue through until 1am. Doors open at 7:30pm and tickets are available at the absolute bargain price of just £15.

The last remaining tickets can be purchased online at https://jackupthe70s.co.uk/ as well as over the counter at Lower Hyde reception in Shanklin and The County Press office in Newport. Over 18s only.

Should advance ticket sales not exceed the venue capacity a small number of tickets may also be available on the door for an increased price.

This is a great opportunity for Island visitors to come and experience everything the Island has to offer out of season. As such mainland residents can save 20% off of Wightlink ferry travel (all routes) when purchasing both their event admission tickets online.

Jack Up The Summer
more info