You are here > Home > Things To Do > St Lawrence Parish Church 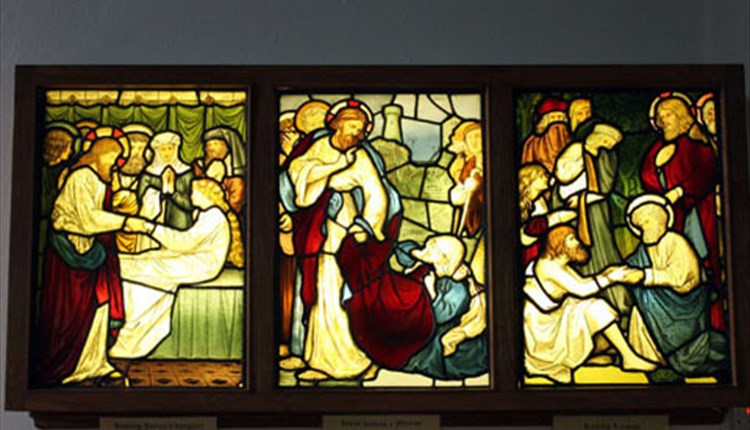 This Victorian church was designed by the architect Sir George Gilbert Scott in 1878. The interior has hardly altered since the church was built.

The stained glass windows are mainly by Morris & Co., and date from about 1873. They were originally in the chapel of the Royal National Hospital for Diseases of the Chest which stood a short distance to the north east of Ventnor. The glass was brought to the church in 1974 after the hospital was demolished. It depicts figures and biblical scenes by leading members of the Pre-Raphaelite Brotherhood, a band of artists who disliked the elaborate Victorian style and were inspired by the work of painters before the Italian Renaissance artist Raphael.

The stained glass figures are now in the centre lights of three south nave windows; left is St Peter the Apostle, right is St John the Evangelist, both by Sir Edward Burne-Jones, and centre, St Luke the Physician by Ford Madox Brown. The three biblical scenes of healing are arranged in a box, with light switch, in the north aisle.

The church already had its own glass. In the south east nave is a window by Walter Tower, 1897, that features the New Testament parable of the sower.

The west window has a design by Sir William Reynolds-Stephens and dates from 1892 when the Pre-Raphaelites were no longer popular. It is a rare example of the artist's 'early Morris-cum-Art Nouveau period' and depicts angels in flowing robes; below a man receives medicine and a doctor takes a woman's pulse.